Know the Tips to Make Sour Cream at home

Thinking about how to make sour cream easily? When we mention the term “cream”, a sweet tinge of taste comes into our mind. The cream is all about whisking the combination of sugar, butter, milk, and other ingredients. Be it a birthday cake, or a tasty cheesecake recipe, the cream is essential. It enhances the taste, decorates the dish. However, the cream is not always sweet. There is an option of rich, tangy sour cream as well.

To prepare this cream, some lactic-acid producing bacterias are added to the sweet dairy cream. The bacterias react with their own properties to produce a sour taste in the cream. it has been in use for years in most of the European countries. The sour cream is majorly used to garnish the dishes like baked veggies, preparing quick dips, and so on. It is also used to thicken various sauces.

Now, let’s know about how to make this delicious, sour cream.

Here is the procedure of how to make sour cream at home. To prepare the sour cream, whisk 1 cup cream and 1 teaspoon of vinegar or lemon juice. You should use a mason jar to whisk it perfectly. Then keep it aside for 10 minutes. After that, add 1/4th cup of milk to the mixture and stir properly. Then, cover the jar with a tight lid. Keep it at room temperature for one or two days. Finally, chill it in the freezer for some time and serve.

Nothing can be better than the sour cream to give your tastebuds a tangy, savory taste. Add a little bit of it on top of your favorite soup, stew, nachos, etc, and feel the heavenly taste coming out of it. Anyway, there are innumerable ways to use this mouth-watering sour cream. Here it goes.

The uses of sour cream:

Now, you know how to make sour cream at home. Let’s know more about other details. Well, some often confuse between the sour cream and creme fraiche. Though these terms are similar, they are not the same. Firstly, sour cream is less expensive than the cream fraiche. The ingredients of both are quite similar. However, the sour cream sometimes includes stabilizers like gelatin, renin, etc. to add thickness to it. The cream fraiche, on the other hand, has natural unpasteurized cream for the thickness. And sour cream has nearly 20% fat content while cream fraiche has 30%.

ALSO READ:  How To Fold A Burrito In 2 Interesting Ways

Why is the milk curdled no sooner than I added the lemon juice?

I tried to prepare sour cream with lemon juice. but it is not set even after 24 hours. why is it so?

It happened because the milk was too cold. The bacteria need some warmth to react. You can keep it in warm places like the oven to provide the required warmth.

So, here is the process of how to make sour cream. Try to make sour cream at home and keep in mind the other details mentioned here for a better result. You can also make vegan sour cream with coconut cream and lemon juice as ingredients. Prepare and use it to make delicious vegan desserts. Have a tasty day ahead! Creme Brulee Torch: Do Not Miss the Quick 6 Steps to Use It! How To Delete Shein Account – A Quick And Easy Guide!

5 Quick Steps On How To Start Lead Generation Business

8 Quick Steps To Use Pumice Stone For Best Results! 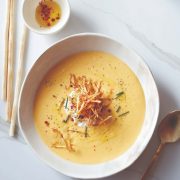 How to Thicken Soup Easily: 8 Quick Ways to Try Instantly at Home How To Measure hand Size- 3 Easy And Quick Ways To Do It Right!