Police Dog Breeds – When the sun goes down, the guardians of the night come out, and these guardians are dogs. Dogs are those who love us more than they love themselves. They are not only a true friend but also our true saviors, and they are proving this point by being a part of the police work team.

Police dog breeds are specifically trained to help police and other law-enforcement personnel. From smell power to fighting ability, these dogs have some special characteristics that differentiate them from normal street dogs and pet dogs. Also, these characteristics make them perfect for combating different kinds of situations.

These furry creatures have been a part of law enforcement since the middle ages. However, the first attempt to use a dog for police work occurred in 1889 in London. Sir Charles Warren, the Commissioner of the Metropolitan Police, trained two bloodhounds to track down serial killer Jack the Reaper. However, it was not an easy task to train them.

Following the flow, different police workers started hiring Bloodhounds for police work seeking the history of them being the best hunting dogs with great smell power and tracking abilities. Europe was the first nation to use dogs for this purpose on a large basis. However, the Belgium police department introduced the first organized police dog service program in 1899. Different police dog breeds entered into the team in the early 1990s.

Check out the Kennel Cough Treatment for Dogs.

A famous dog breed that has a long history in the K-9 world. Whenever it comes to police dogs, the first image that comes to most of the people’s minds is “German Shepherd”. Over the years, this excellent breed has gained a reputation as the world’s leading police dog.

There are multiple reasons for the German shepherd being one of the best choices of the K9 unit. It can be said that it is in the blood of these dogs to be competent enough. For other breeds, what may prove stressful is just normal for this German breed.

It can be concluded that German Shepherds are prized for their intelligence, obedience, and temperaments. These are the traits that make them a great choice for police work and other services, including farm work, different competitions, etc. This is the breed that is mostly confused with the German Shepherd breed because of their similar appearance and furry coat. For a long time, they are also increasingly replacing german shepherds in police work. However, they differ in various ways.

Nowadays, Malinois is one of the top choices for police dog work, military K-9 service, private sector protection, and security work. This breed’s character makes them perfect for such jobs. The reason for being chosen as a guard dog or police dog lies in Malinois’ physical frame and temperament. This is an extremely energetic, healthy dog with an eagerness to work for a long number of hours.

From a friendly companion to a great detective, this breed has all the qualities to serve you with the best. For a long number of years, bloodhounds have helped law enforcement agencies to track down missing persons and criminals. They have some special traits that make them perfect for detective jobs.

It is true that in this modern era, police forces have exciting new technologies available to them. However, many still believe that bloodhounds are still the best option when it comes to tracking. Giant Schnauzer is a breed that was originally raised as a multipurpose dog that is considered for guarding property and driving animals to market. Then in the 20th-century people started using them as a watchdog at factories and other places, and in this modern time, this breed is being used as a police dog. This is all because of their working ability.

From being a hard worker to a smart worker, these dogs have exemplary traits that call them a leading pick for police dogs, military dogs, search and rescue dogs, and even guide dogs. For the last 3-4 years, American Pit Bull Terriers have been seen to be added among police dog breeds. Because of their dogfighting history, they were rarely hired for police work; however, this seems to be changing as law enforcement has realized the supreme power of this breed.

This fearless, confident creature seems to be more and more demanded in the K9 units. Even this breed can be added to the military too. 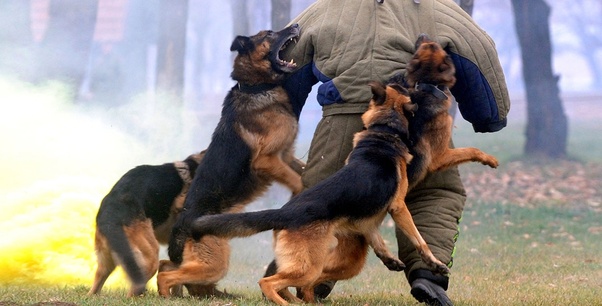 Usage of Police Dog Breeds by Some of the Famous Regions

In India, Belgian Malinois were inserted into the K-9 unit, Border Security Force, and also were used to support the force on the Kashmir border. For regional security, the city’s street dogs have been used by Delhi police. While in Bengal, German Shepherds, Labrador Retrievers are used for different police and guardian tasks.

Police dogs have been widely used in the US for different purposes such as drug, bomb, and weapon detection. Mostly German Shepherds and Belgian Malinois are used for most of the tasks, and other breed dogs are used for some specific purposes only.

Like the US, the UK also uses police dogs for a wide number of tasks. At a time, there were around 2500 police dogs employed in the UK police forces, and most of them were Belgian Malinois.

Q1 What dog breeds are used for police work?

Some of the top police dog breeds are:-

Some of the infamous choices for police dog breeds are:-

Q2 Why is Belgian Malinois a top choice for police dogs?

Belgian Malinois are very much similar to German Shepherds. They are energetic dogs with strong defensive instincts and have an ultimate level of stamina and athleticism that enable them to work for a long number of hours. Also, they have a very keen sense of smell. All these traits of Belgian Malinois make them perfect for police dog work, military K-9 service, private sector protection, and security work.

Q3 Why are Rottweilers not preferred for police work?

Although Rottweilers are known for their strength and ferocity, they are still not the top choices for K9 units. This is because of some of their characteristics like aggression, agility, dangerous bite, maturity time, lifespan, and size.

Q4 Do police dogs get paid?

Usually, police dogs are not paid. Instead, all their expenses, including food, shelter, medical care, etc., are taken care of by the department. These dogs live with the handlers/carers so that handlers get some additional pay to take care of them all the time.

K9 normally signifies trained police dogs. It is pronounced similar to the canine that means a dog.

Q6 Why does a policeman always use a German Shepherd for police work?

It is not true that police always use German Shepherds for police work. There are also other breeds that are used for such tasks, including German Shepherd, Belgian Malinois, Bloodhounds, Giant Schnauzers, etc. However, it can be said that the German Shepherd is the most famous police dog breed. This is because it is the most intelligent, powerful, athletic, and energetic breed.

Whether it is the US or UK or India or Pakistan or any other country, each country is training dogs to make them a part of their fighting forces. The trend that started from a single breed – Bloodhound, has now been expanded to different breeds. When it comes to police dog breeds, it can be said that any dog can be made capable of being a part of a police team by giving them training, but some dogs have these features in their blood that make them a prior choice in K9 Units.

There is a famous saying, “If you want a friend, get a dog.” This is a very true statement; dogs can make your life too and save your life too.